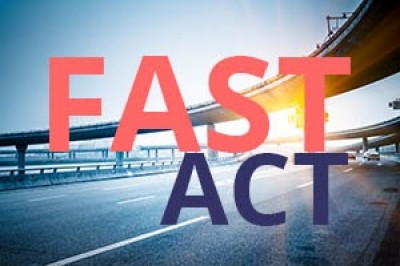 On December 1, the two chambers of Congress reached an agreement on a five-year highway bill (dubbed the Fixing America's Surface Transportation (FAST) Act). Now that the two chambers have drafted a unified bill it must be returned to each chamber for passage before being passed on to President Obama for approval.

The hotly debated Interim Hiring Standard (known also as the National Hiring Standard) amendment was left out of the bill, drawing the ire of several major industry stakeholders. Initially the IHS stated that all carriers without an unsatisfactory rating would be considered legally safe, but was then modified to state that only satisfactory carriers would be considered safe. Some stakeholders protested that unrated carriers should be included in the amendment while carriers with "conditional" safety ratings should be excluded.

Here's why not including the IHS amendment is a GOOD thing for the transportation industry:

Should the IHS amendment have been included in the FAST Act, roughly 430,000 of 474,000 all active, legal, for-hire motor carriers in the United States would have been deemed legally unsafe for hiring. Why? Simply because they are unrated.

That's right--83% of the industry (many of whom are small businesses) would be deemed unhirable for the simple fact that they have never done anything to trigger an FMCSA audit to determine their safety score. Furthermore, the amendment would have placed 10,000 carriers (3.5% of the industry) who have "conditional" ratings in the same boat as those without a safety rating.

Including the IHS amendment in the FAST Act would have almost certainly have created a path to significant economic downturn, as the largest segment of carriers in the industry would have been prevented from working. The industry is already experiencing a significant truck/driver shortage and it is mind-blowing that anyone would essentially advocate to exclude 86.5% of the industry from doing business.

The amendment's exclusion from the FAST Act essentially means that the industry's interpretation of "safe" carriers mimics the FMCSA's long-standing safety position. Namely all carriers without an "unsatisfactory" rating or "OOS" order are legally bound, and thus safe, to operate on our nation's highways.

This is the correct stance -- carriers who have not received an "unsatisfactory" safety rating should be considered hirable. Anything other than that would not only cripple the businesses of carriers with conditional and unrated safety ratings, but also a deal a severe blow to the transportation industry as a whole.